Hex has first-class SQL support via SQL cells, each of which is a fully fledged query IDE complete with autocompletion, caching, a schema browser, and more. Projects can have an unlimited number of SQL cells interleaved with Text, Code, Chart, or Input cells, creating an extremely flexible querying environment.

Hex's cell-based structure, along with a couple other Hex-specific features, makes for a more powerful but slightly different querying workflow than you may be used to. There are five key principles to understand about writing SQL in Hex:

When should I use data connection SQL vs dataframe SQL?#

However, you can build clever and complex things by combining these two in more fluid ways, from "Chained SQL" workflows that replace subqueries to powerful cross-database joins. Some examples of when you might reach for dataframe SQL over data connection SQL:

The biggest reason not to use dataframe SQL, if you're in a situation where you can write data connection SQL instead? Dataframe SQL queries must be written in DuckDB's PostgreSQL-like flavor of SQL, which doesn't support some database-specific functions— or just might feel unfamiliar to you. Also, dataframe SQL requires the dataset be loaded in-memory, which precludes extremely large datasets from being queried this way.

In general, we hope that it Just Works, but this matrix may be helpful when trying to decide which mode to use:

* To be clear, we're talking of upwards of tens of millions of rows / tens of GB here.

When should I use query mode vs. dataframe mode?#

Query mode queries are generally used as intermediary steps in an aggregation pipeline. You can think of this workflow like a funnel: you are starting with an extremely large dataset, and progressively making it smaller and smaller as you understand more about it (via subsequent chained SQL queries), until it's small enough to be returned in-memory with dataframe mode and visualized.

When should I chain SQL?#

Hex supports a workflow called chained SQL, where a SQL query references another SQL query from the project in the FROM clause. This functionality is slightly different across data connection and dataframe SQL, but the end result is the same: you can break large SQL queries up into individual cells that are clean and easy to debug. There are many examples and details in the reference section, but the two main use cases of chained SQL are easy to understand: simplifying complex queries, and letting SQL users 'drill down' into data.

Chained SQL can be used to break complex queries into atomic units that are easy to read, understand, and debug. A query with three CTEs can become four chained SQL cells, each able to be run, edited, cached, and debugged separately.

Chained SQL also lets users explore and iterate without rewriting code. Run a query with an interesting output that you'd like to drill deeper into? Traditionally, you'd copy that entire query and change it to fit your new format. If you had to aggregate at different levels, you'd begin to write a CTE (see point #1). With Chained SQL, you simply add a new SQL cell and write a fresh query against the interesting output.

This is available for dataframe SQL and data connection SQL, but is evaluated somewhat differently— dataframe SQL is actually running against the materialized output of previous queries, while chained data connection queries dynamically compile to CTEs in a final query executed on the remote connection. In practice, this doesn't have too much of an impact on user experience outside of the fact that staying in data connection SQL means you can keep using warehouse-specific SQL syntax features. Read more in the reference section of this doc.

Hex continuously and reactively re-executes cells when their dependencies and inputs change. This makes intuitive sense for Python code in the context of a notebook, but can be an adjustment for SQL users that are used to having to click "Run". Here's what you really need to know:

This is the SQL option you are probably most familiar with. Once you have configured a data connection to your warehouse or database, you can query it though a SQL cell. If your workspace has set up shared data connections, these connections will also be available to choose from.

You can then write SQL directly in the cell, using the SQL dialect of the selected connection:

Running an uncached SQL cell will run that query against your database. To avoid accidentally running expensive queries every time you re-run a project, you can cache query results.

If you know you'll be running a lot of queries while developing, it can be smart to add a temporary LIMIT clause to potentially large queries.

SQL cells have an integrated preview which shows up to 10 rows.

Data connection SQL cells can return results in two different ways: dataframe mode or query mode. Dataframe mode, the default, is great for most use cases. Query mode should generally be enabled only when working with extremely large result sets.

In dataframe mode (the default), SQL cells return their entire result set in-memory as a pandas dataframe. If you run "SELECT names FROM fruit_table" in dataframe mode, there will now be an object taking up space in the project's memory that contains a few hundred fruits banana,apple,pear,etc. You can operate on that dataframe anywhere in Hex— reshape it in a Python cell, query it using dataframe SQL, visualize it in a Chart cell, etc.

In query mode, SQL cells return only a 100 row preview of the result set alongside a "query" object that serves as a pointer to the complete result set. The complete result set does not leave the warehouse or database, which makes this mode far superior to dataframe mode when working with large datasets. Waiting for a 100 million row query result to stream into Hex in dataframe mode could take minutes, or crash the notebook; If you're going to continue operating on and aggregating the data, you may as well leave it in the warehouse and just return a query that you can reference in subsequent chained SQL queries.

Hex also lets you write dataframe SQL against any dataframe in the project, including the results of previous SQL Cells.

Dataframe SQL queries execute right in Hex using DuckDB, so they don't incur any usage costs on your data connections. The SQL syntax is very similar to PostgreSQL, and the full reference can be found in the DuckDB docs.

Wondering whether to use dataframe SQL or not? Check out the SQL Principles section of this doc.

To use dataframe SQL, add a SQL cell and select Dataframes as the data source. 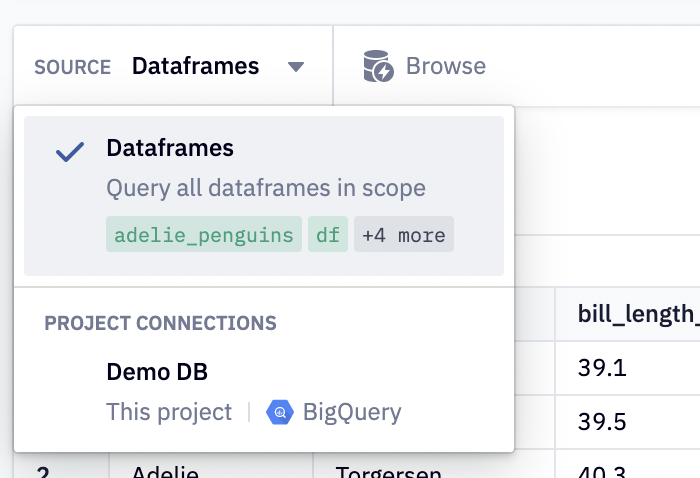 You can then reference any dataframe in the FROM or JOIN clauses, using the dataframe name where you would normally use the SQL table name.

Dataframe indexes are not returned or accessible in a dataframe SQL query. This also applies to multi-index dataframes, and although queries will not error, you can lose important nested context if you aren't aware of this. If you need to preserve an index, we recommend calling reset_index() on the dataframe before querying it with SQL.

Caching is not available for dataframe SQL. This is because dataframe SQL doesn't hit your database, so caching wouldn't protect you from any accidental spend.

Also, it's because dataframe SQL runs in-memory and tends to be very quick :)

Chained SQL is a common workflow in Hex that allows a SQL query to reference other SQL queries from the project in its FROM clause. This functionality is slightly different across data connection and dataframe SQL, but the end result is the same: you can break large SQL queries up into individual cells that are clean, efficient, and easy to debug.

For advice on when to use chained SQL, see the SQL Principles section of this doc.

When you go to write another, more in depth query, you don't have to write it against "users.csv" anymore. You can write a chained dataframe SQL query directly against the users dataframe:

This is a simple example, but you can see how, in a complex project, this could get useful. Especially if you dabble into Python; imagine you have Python code that generates cohorts from that users query:

Rather than be stuck in Python, you can jump right back into SQL using a dataframe SQL cell:

Generally, the following mappings are applied:

¹By default, decimals will be cast to floats. This behavior can be turned off — see the below section for more information.

By default, any column with a decimal type will be cast to a float. This is because Pandas does not support decimal datatypes. In general, casting a decimal to a float makes the number easier to work with downstream, and easier to format in our Table display cells.

However, there are times when casting a high-precision decimal to a float will result in loss of precision. In this case, you can disable the Infer numeric datatypes option in the SQL cell configuration options. When this setting is turned off, decimals will instead be represented as an object type.

When executing SQL cells, we inject a comment into the queries including metadata on the source of that query. Namely the issuing user's email, a link to the project and cell where the query originated, and the relevant trace ID. This allows database administrators to track down and audit queries originating from Hex. To view query metadata, click on the view compiled icon in the top right corner of the cell.

You can write multiple statements in a single SQL cell, separating statements with a semicolon,;.

Below is a PostgreSQL example that:

Some database have limitations for how statements which write back to the database are supported.

From there, you can explore a connection's database schema, tables, and columns by selecting the > button.

You can also click the Browse button on any SQL cell to jump to the current data source in the schema browser.

The initial load time for full schema details can take a few seconds. We cache schema results so that future references to the database details are immediately available.