Additions and updates to Hex.

You can now share access to data connections, secrets, and GitHub packages with only certain User Groups. Why is this important? Well, now you can do something like this:

Slightly confused? I was too, so here’s a 2 minute video showing it in action. 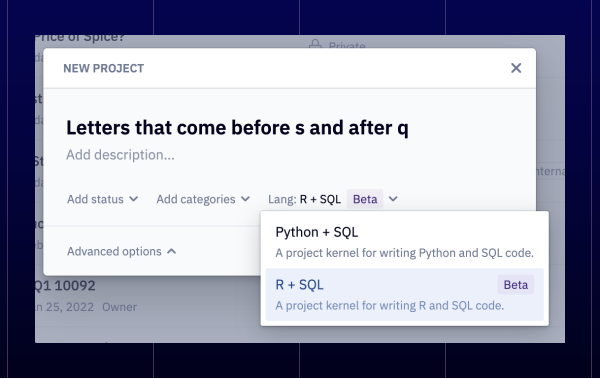 Everyone now has access to create R projects in Hex!

R is fully supported and stable, but R-based projects are still not at full parity with Python. We will be adding more features over time as we hear requests. For a full list of supported features, head to the docs. Here is a very basic R app, if you want to see an example.

Thanks to everyone who gave this a spin the last few weeks!

We quietly enabled this a few weeks ago, so you may have already noticed that chart cells support multiple layers! 🎉

Each layer is configured entirely separately from the others, so you can mix and match dataframes, axes, chart types, you name it. I use this feature regularly to show two related metrics at once, like weekly sessions & conversions.

You know what’s so 2021? docs.hex.tech. You know what’s totally 2022? learn.hex.tech! We’ve completely rebuilt our docs site and filled it with new content: In addition to product docs, you’ll now find quickstarts, an ever-increasing library of tutorials, and an integrated changelog. 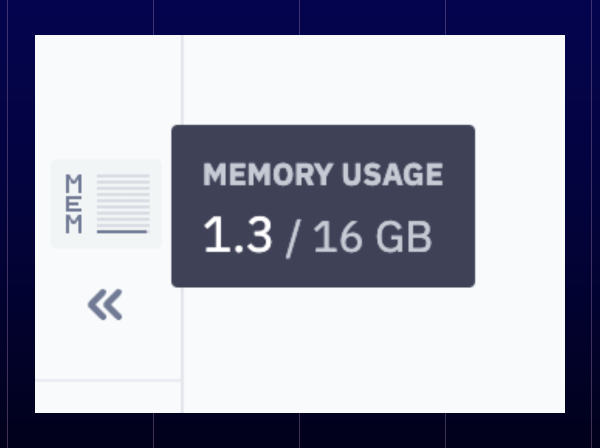 A physically small but oft-requested feature: A way to see how much memory a project is using. Find the new memory usage indicator in the lower left part of the project sidebar.

It will start to fill up and turn red as you approach the memory ceiling of your kernel.

We’re rolling out an all-new app builder to help you more easily build beautiful Hex apps. It will eventually replace both Story and Canvas layouts, so we’re not calling it anything more exciting than App Builder.

The new App Builder has:

We think it’s pretty sweet, and hope you do too! You’ll probably be invited to try it out next time you build a Hex app.

In addition to full app embeds, you can now embed individual cells from Hex projects. Hex embeds work in Notion docs and anywhere that supports iframes— like Salesforce, Confluence, or even this changelog:

For more on embeds, we blogged about this the other week: http://noscreenshots.club/

Table display cells can now filter data. Gone are the days of preceding every Table Display with a Dataframe SQL query or pandas one-liner to extract a subset of data for display. Like a spreadsheet, you can use a flexible condition-based UI to quickly filter a dataframe without using code.

All the same logic used for Conditional Formatting is available in filters, and multiple conditions & filters can be combined to create complex logic. 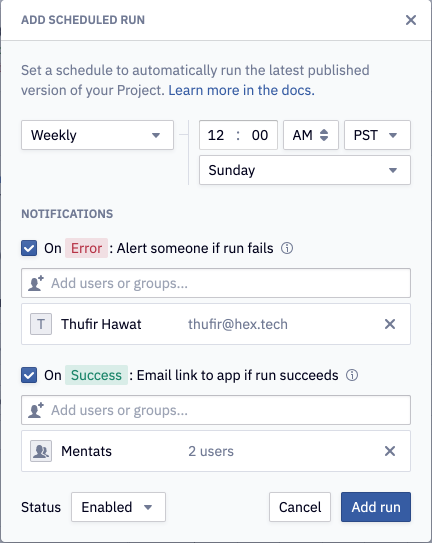 You can now add multiple schedules to a single project, and choose to send notification emails on successful and/or errored runs.

Want to quietly refresh data in an app every day at midnight, but only automatically remind your teammates about it on Monday mornings? Easy peasy.

We’ve got some new friends, and they all have fancy lakehouses. Hex now connects natively to Databricks, Trino, and Dremio. You can add these to any project or workspace just like any other data connection. Specific instructions on configuring them are available in the docs. 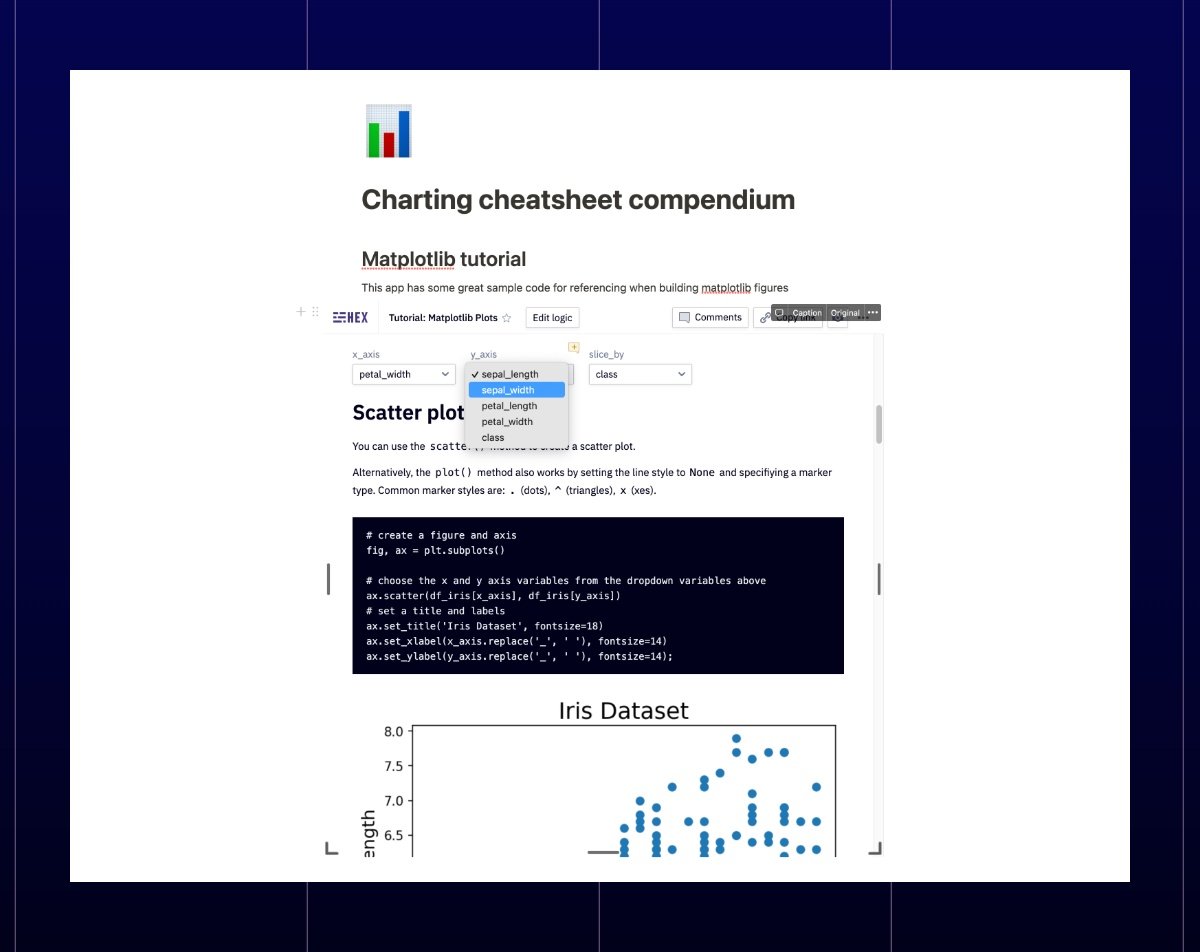 Speaking of Knowledge, we know a lot of you keep your organizational knowledge in Notion. Us too! Despite being founding members of the Anti Screenshots-of-Charts League, we occasionally found even ourselves adding screenshots of Hex apps into Notion pages where a link just wouldn’t cut it.

So, now you can directly embed Hex apps into Notion pages! Just copy & paste the link to a published Hex app into a page, and choose “Embed Hex” when prompted. An embed frame will appear that you can resize appropriately. Check out the docs for all the details!

The Knowledge Library is a new set of workflows and features in Hex that empower teams to create knowledge from their work, rather than just standalone insights. You might remember last month’s announcement of new project metadata, including tags and statuses. Now, you can use specific statuses (like “Approved” or “Production”) to include projects in the new Library view.

The Library UI is a new homepage view that only displays published apps with a “Library Status”, filtering out any active drafts, half-finished explorations, or archived and deprecated work. This is also the default view for View-only users, who are likely primarily interested in approved & verified work.

All the usual search & filtering options work on the Library, and we’ll be continuing to add new metadata that makes it easier to keep relevant knowledge easy to find.

We wrote some more about the Knowledge Library (and Knowledge in general) over on the Blog.

R support has been a common request for as long as Hex has been available. We’ve always waxed polyglot about programming, and though it’s usually been about Python, we never planned to only support Python workflows.

It’s in Preview, so kinks are still being ironed out, and it may not reach full parity with Python for some time. We’re really excited to start supporting teams and individuals that primarily use R— if that’s you, please reach out for Preview access!

We've added a sidebar to published apps that makes navigating comments more natural. Now you can pop open the comments sidebar to see all open & resolved app comments. You can quickly navigate around the app by clicking comments, and reply or resolve right from the sidebar. Check out a quick video walking through it.

We've added project titles, statuses, and categories to the top of the Logic View, where they're more easily seen and edited.

There's also a new piece of metadata— Descriptions can now be added to projects, allowing for additional context, helpful links, or anything else you might want to add.

You can also use this metadata as a title & header for Story mode apps. Use the new App Display menu to configure what to show viewers of your app. This means you don't have to add markdown cells to serve as app titles, and can also surface helpful information about status, edit date, and authorship.

We've turned this off by default so you don't have duplicate titles in apps that may have existing markdown titles. Next time you're in an app and it has a markdown based title though, you know what to do... 🔪

You can now make project titles "super duper insanely long" without the title truncating as early.

We are beta-testing a method to improve performance for large projects with 100+ cells. You may notice scrolling working a bit differently - please let us know how it feels!

Got a few "Untitled project"s lying around? Us too... so we've made it much easier to name projects right when you create them.

(pro tip: opt+shift+n will let you quickly create a new project, even if you're already inside of another project)

We've given the Outline a fresh new look! You will find it nicely streamlined and focused on cell outputs, so you can more easily navigate your projects.

You can also now filter the outline, choosing to only show Markdown cells or Input Parameters. 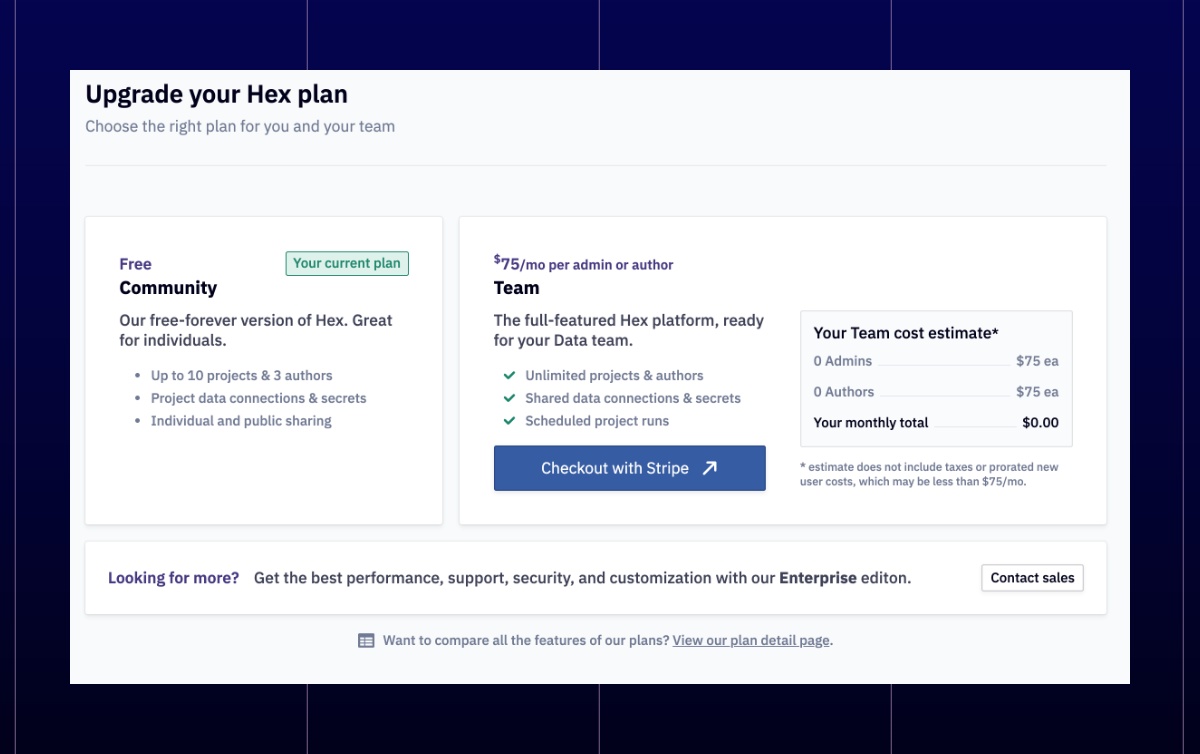 You can upgrade and manage your plan directly from the Hex admin panel! Head to the Admin > Upgrade Plan page to "swipe" your card and get up and running. 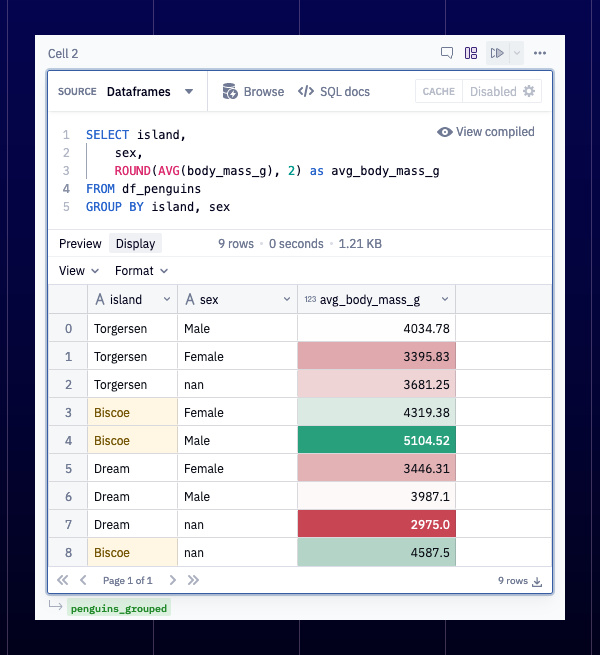 Having to add a Display Table right after previewing the output of a SQL cell always felt a little repetitive in the redundancy department. Now, not only can you add the output of your SQL table directly to your apps, you can also enrich that output as a fully-fledged Display Table!