From the left sidebar you can navigate to several environment views: Outline, Files, Data sources, Environment, and Variables (including Secrets and Environment variables).

Upload files for use in a given project. You can load in source data, figures, images, etc.

Depending on the needs of your project, you can opt into more (or less!) memory and processing power by changing the size of your kernel.

Compute Profiles can be changed in the Environment section on the left side panel by adjusting the Size dropdown under Compute Profile. Profiles range from 2-32 GB of memory and 0.25 - 4 CPUs.

Users on Community plans are limited to small kernels, users on Professional plans can select up to medium kernels, and users on Teams or Enterprise plans can use any kernel size. For more info, see Hex's pricing page.

By default, projects are created with a Medium profile. Note that if you have configured scheduled runs of a project, those will run with the compute profile as set in the latest published version of your project.

Keep your sensitive values, like API tokens or passwords, secret by adding them as Secrets. We store all Secrets in a highly-encrypted vault, which is only visible to other users with "Full Access" or "Can Edit" project permissions. Secrets can be referenced in Python cells, but an attempt to display them in the Logic View or App Builder will return [SECRET VALUE] .

You can add a Secret to a project by clicking the +Add button in the Secrets tab of the left sidebar. If you want to use a Secret which is defined as a shareable, workspace Secret, choose Import workspace secret from the menu to be presented with Secrets which are available for import. If you want to create a Secret for use only in the given project select Create project secret.

To access your Secrets, call them directly in place of where you would hard-code your credentials. In the example below, we're setting up a Snowflake connection and passing the database details as Secrets. We also have some variables which are automatically included in your project. These variables can be referenced in any logic cell.

If there are cells in your project that you only want to execute in specific contexts (e.g. on project runs in Logic view, only during scheduled runs, etc.), you can do so using the built-in hex_run_context and hex_scheduled variables. With these variables, you can check the context for when each cell is run and execute the desired logic accordingly. See the below code snippets for some examples code!

Similarly, you can do the same in an SQL cell via Jinja.

The Variable explorer allows you to browse the objects generated by your code. For each object, we show you its name, type, and value. 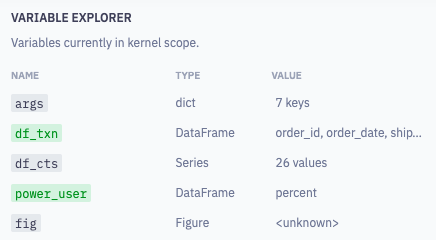